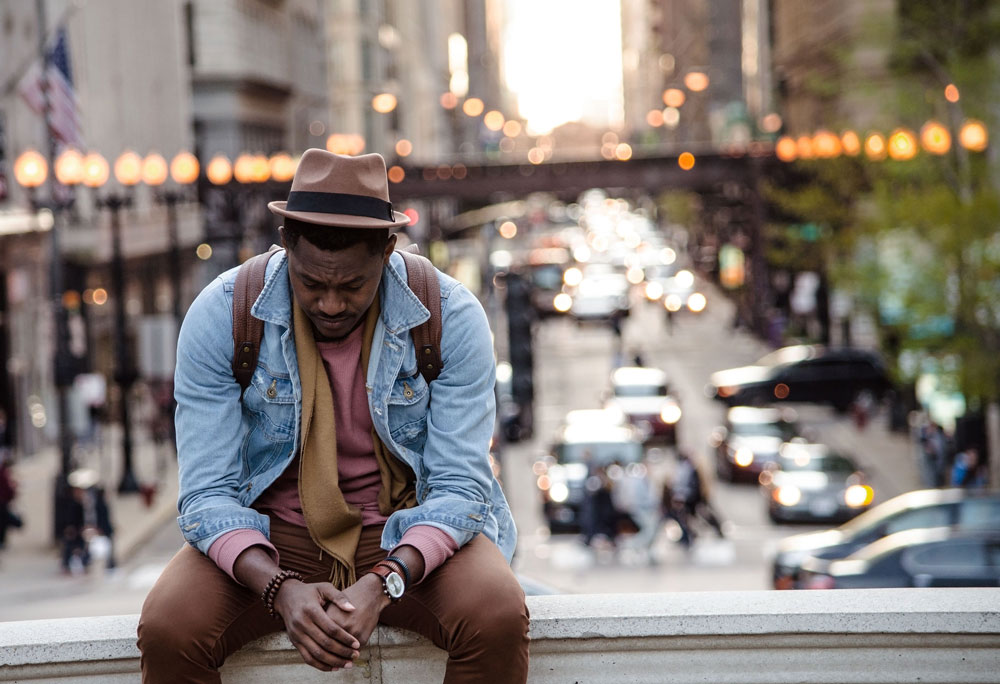 Coping with losing a loved one is one of life’s great difficulties.

If you’ve experienced the pain of mourning, you know that any way to ease the loss is welcomed. Not everyone grieves in the same way; we have individual patterns and different outlets for grief. One never really knows when or how it is going to manifest.

There are the well-known are the 5 Stages of Grief: Denial, Anger, Bargaining, Depression, Acceptance—but people do not always experience these stages in any particular order, and some do not experience every stage.

Consider this man’s journey to cope with his grief and the way he was able to use his crushing pain to empower him.

How to Make Sense of Suicide

The community of people fighting addiction carries the burden of grief for far too many dying far too young. One study showed that at least 25 percent of alcoholics and people with other addictions die of suicide. Other research reports that people with addictions are about six times more likely to attempt suicide and more likely to succeed. People overdose—and we don’t know if it was a suicide, an accident, or if they just didn’t care. The don’t-care stance needs a name of its own.

So it’s common for anyone with an addiction to know someone who died of it, either with some degree of intention or by accident. The bereaved face unanswerable questions. Was he angry at me? Did he know how much this would hurt me and mean that? You might want him to be angry so you can be angry too, which might feel better than grief. You might want to think he wasn’t angry, because if he was angry you may believe you deserve such rage.

Those kinds of riddles don’t come up when people die in other ways. Knowing someone who died by suicide is a risk factor for mental health problems, and the effects can last for years. In a phone survey led by the prominent suicide researcher Julie Creel, almost half of more than 1,700 adults in Kentucky said they had known someone who died by suicide. That may sound like a large number but social media now spreads the news. Also, suicide rates are up, after dropping for more than a decade until 2000. In 2015, 13.26 for every 100,000 Americans died of suicide. In the Kentucky survey, people who knew someone who had died by suicide were around twice as likely to have diagnosable depression and anxiety and more likely to report their own thoughts of suicide.

The measure of pain, of course, is commensurate with the closeness of the relationship. When children lose parents to suicide, they may feel isolated, abandoned and responsible and they are more likely to die of suicide, like Nicholas Hughes, the son of Sylvia Plath. Losing a child is horrifyingly difficult, too, laden with guilt.

Our grief for a suicide victim may be retriggered by anniversaries, holidays or other reminders. That’s true for all mourners. But if you were very close to the person who died of suicide–or are fighting depression or anxiety–you may well have suicidal thoughts when those triggers come up. I lost a lover who was my dearest friend for a decade, and I have had dreams in which he asked me to join him. I’m not alone, reports Jennifer Michael Hecht in Stay: A History of Suicide and the Philosophies Against It. I now suffer fears of abandonment whenever a relationship seems rocky. I’d never had that fear before. The effects can show up in other odd ways. I’ve felt a tug of suicidal thinking when falling in love. I’m falling in love again. I think my body remembers, and the suicidal piece floats up from the wash of memories.

When we think of drug-related deaths, we picture people like River Phoenix, young people overdosing on heroin or pain-killers mixed in with other drugs. We don’t think of alcohol—but we should. In one study at Portland State University, researchers looking at 58,000 suicides across 16 states discovered that 24 percent of the men and 17 percent of the women were drunk when they died. Heavy drinking is a cherry-red flag. The group most at risk of suicide is white middle-aged males. They may use guns but are often drunk. Think of George Bailey in It’s a Wonderful Life. Just before his guardian angel, Clarence, appears, he’s about to jump off a bridge after getting drunk and crashing his car into a tree.

People who struggle with addiction know the power of influence, why it’s necessary sometimes to leave a group of friends or a spouse who sets a bad example of abuse. Suicide also sets examples we must resist. Speaking of suicide “contagion” is not just a metaphor. After Johann von Goethe’s The Sorrows of Young Werther prompted the first known wave of suicides, authorities in Europe banned the book. The media now have instructions on how to report suicides to limit the damage, and when they follow them, they work. When Kurt Cobain died, Seattle coverage included messages about treatment for mental health and suicide prevention and candid details about the pain his family experienced. Calls to local suicide hot-lines rose and the suicide rate dropped. There’s a lesson in that for how to speak with people contemplating suicide and to people grieving a suicide.

Suicide is especially contagious among people ages 15 to 19, who are already very prone to suicidal thoughts: according to 2013 data from the Centers for Disease Control and Prevention, more than 22 percent of American high school girls think about attempting suicide. But thought doesn’t mean action. Only half of them made a clear suicide attempt, which often wasn’t all that dangerous; 3.6 percent did something that made them need medical attention. Among boys, nearly 12 percent considered suicide, more than 5 percent made an attempt and 1.8 percent needed medical care as a result.

Hearing about a suicide in your town or school can push a suggestible depressed teen to act. Attempts tend to come quickly after the decision—from five minutes later to a day. That time shrinks when the means is nearby. Among teens, more than 70 percent of suicides may be complicated by drug use. Research also shows that loss of appetite, not sleeping much, focusing on electronic gadgets and not exercising may also be predictors for suicide.

Go ahead and ask your daughter if she’s suicidal or make sure a therapist does; some people think it will put the idea in her head, but studies show that asking the question can save lives.

If she is having suicidal thoughts, act fast: according to some research, any treatment will do the most good within the first six to 12 months after the suicidal thoughts begin. Studies indicate that teens improve in groups led by a specialist that allow them to share their suicidal feelings. Be sure your teen attends any suicide-prevention programs in her school. The programs teach teens to recognize the signs in each other. Those signs aren’t obvious and sometimes there are no signs at all. In fact, a team making a film about suicide on the Golden Gate Bridge thought they could spot the vulnerable people walking on the bridge–but they couldn’t.

People intending suicide can fool clinicians, which is why so many people die in the first week after leaving a psychiatric unit. Two good questions to ask anyone you fear is at immediate risk of an attempt: “Do you feel trapped with no good options left? Are you overwhelmed by — or have you lost control of — negative thoughts filling your head?” Igor Galynker, MD, PhD, at Mount Sinai Beth Israel Hospital in New York has found that patients of any age who answer those questions emphatically, whether they say “Yes” or “No,” are at greatest risk. (The people who say “No” are lying, but the tone of their response is a clue.) His team has pinpointed an intense state of “frantic hopelessness,” epitomized by a patient who said, “Imagine you have been left behind in a department store after hours. The lights are going out. You are trying to escape, you are running from door to door, but all the doors are locked.” Another sign is unfamiliar physical sensations, often in the skin and all over the body.

Like addiction, suicide runs in families. Thomas Joiner is a psychologist who made studying suicide his life work after he lost his father. In his books Why People Die By Suicide and Myths about Suicide he cites some 200 risk factors that include genes, depression, other mental illness, and early trauma. Having a parent with an addiction is a risk factor and if your parent dies in an overdose or clear suicide attempt you have that burden, too.

Don’t let anyone tell you that the person who killed himself was selfish. In Joiner’s model, three forces build on the risk factors and combine to trigger suicide attempts: you see yourself as a burden to anyone who cares, you also feel isolated or alienated, and you have learned not to fear death. People in the grip of addiction and depression may decide that their family and other connections will be better off without them. Like suicide bombers, they see their deaths as noble.

Also don’t let anyone tell you that your loved one was doomed. To assuage my guilt, people often said to me that there’s “nothing you can do—if someone really wants to die, he’ll succeed.” It’s not true, and I knew it. He died because of cracks in the mental health care system, and the platitude just made me feel more alone. The vast majority of people survive attempts; according to one estimate, less than 9 percent of people who have been hospitalized because they were suicidal actually die that way. Barriers on bridges and keeping guns and pills out of reach save lives. Tight gun laws, for example, have slashed suicide rates in Brazil, Canada, Australia, New Zealand, the United Kingdom, and U.S. states. The research is so clear that after decades of stalling, San Francisco has decided to put up a net on the Golden Gate Bridge, which is expected to be finished by 2020. The Port Authority of New York and New Jersey, which operates the George Washington Bridge, is putting up a barrier by 2024. That’s an inexcusably slow response.

The public at large still tends to blame the victim or pretend suicide doesn’t exist. “The memory of it, the pain of it, it’ll lessen – for sure – with time, but it never really goes away. And all of that is just compounded by some of the – frankly appalling reactions that people have to the bereaved of suicide decedents. It’s just such a stigmatized and misunderstood thing that the family members left behind have really, really quite a burden to carry,” Joiner says.

If you have a philosophical bent and ever have suicidal thoughts, read Stay—it helped me. Hecht has a straightforward message: think about the harm your tragic death will do to others. Also think about the good you can do in the future, and its absence if you die now.

In It’s a Wonderful Life, when Bailey wishes he’d never been born, his guardian angel shows him what his beloved Bedford Falls would look like if his wish came true. I wish we all had Clarences to speak to us in our low hours. But you can be a Clarence for yourself or someone else. When you’re depressed you may be unable to think of anything good you’ve done. So imagine the possibility that you can do good in the future. It’s always possible. When we’re in pain we want relief and people need pleasure. But we need to feel wanted and needed even more. Make amends, be useful. Quit. Help someone quit. Be grateful and express your gratitude especially to a friend who may be feeling unneeded herself. The burden we carry is bitter—and can embitter, or teach us gratitude and compassion. We each make that choice every day.

(used with permission from thefix.com)